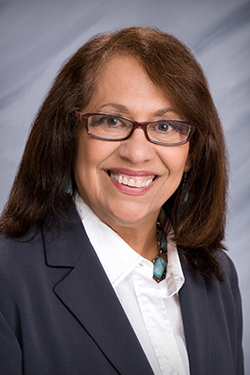 Martha Flores was born in Guatemala and raised in El Salvador. She attended El Camino Community College and earned her AA degree. She also attended California State University Los Angeles, where she received her BA degree in 1975 and later, in 1979, her Master's in Fine Art. Martha also has a master's in counseling psychology.

Martha worked as a family therapist in her private practice for 30 years. She contracted with Eastmont Schood District, DSHS, CPS, Juvenile Center, Head Start, Maternity Support Services, and Catholic Families. She taught Spanish and art appreciation classes at Wenatchee Valley College. She teaches parenting classes, Love and Logic for Together for Drug free Youth, art classes at Wenatchee Valley Museum and Playback Theatre, and at some of the schools in the area.

Prior to moving to Wenatchee in 1992, she had many art exhibits and commendations including one from the then Mayor of Los Angeles Tom Bradley. She has written two books in Spanish. She is frequently called upon for public speaking engagements to share her unique blend of inspiration, motivation and creativity on women's, children's and family themes, drawing upon her years of experience as both a professional artist and as a family counselor. She has taught art in California and Washington for over thirty years and has exhibited in several galleries, museums and other venues in the Northwest for the last 22 years.

Martha has served on several boards, including Allied Arts, Wenatchee Museum and Wenatchee Art Commissioners. She volunteers at the museum and at Bruce Housing.

Martha and her husband Rod were foster parents of adolescent boys for seven years.