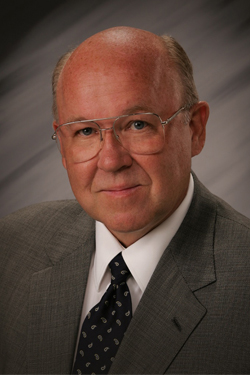 Phil Rasmussen appointed to WVC Board of Trustees

Wenatchee community leader Phil Rasmussen is in his second term as a member of the Wenatchee Valley College Board of Trustees. He was appointed to a five-year term by Washington State Governor Christine Gregoire.

“Phil Rasmussen’s support for education and his service to the community make him a wonderful choice for the board,” said WVC President Jim Richardson. “The students in our large district will benefit from his vision and experience. He understands the mission of community colleges, and he’s already demonstrated his commitment to that mission.”

Rasmussen served as works manager for Alcoa from 1999 to 2002, and then as manager of strategic energy projects, primary metals, which involved negotiation of energy/manufacturing projects in British Columbia, Newfoundland and Labrador. He retired from Alcoa in 2003 after 36 years of service.

He served as chair of the WVC Presidential Search Advisory Committee in 2005 and is a past president of the WVC Foundation.

An active member of the Wenatchee Rotary Club, he has served as its president, as well as participated in the training of youth leaders in Canada during Memorial Day weekends as part of the Rotary Youth Leadership Awards program and as a member of the Rotary Park Committee.

He served on the board of United Way of Chelan and Douglas counties from 1999 to 2004.

“Wenatchee Valley College has such a major role in the future of our region,” Rasmussen said. “I have very much enjoyed serving on the Foundation board, and I want to continue to serve WVC in any way that I can to support its continued improvement.