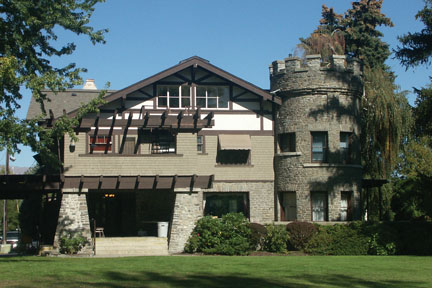 Wenatchee Valley College opened as a private institution in Wenatchee in 1939 as a result of donations from 51 local citizens. Two years later, it became part of the state's public education system. Classes were held on the third floor of the Wenatchee High School building on the corner of King and Idaho streets until the donation of the A. Z. Wells home in 1949.

Wells House, a large house on a five-acre tract on Fifth Street, was built of hand-hewn stone from the Columbia River and graced with castle-like turrets. It housed offices and classrooms, then later became a dormitory after the construction of additional buildings. Adjoining landowners agreed to sell acreage to the college at cost, expanding the campus to its current 56 acres. Wells House (located on college property) is now owned by the Wells House Committee, which restored and maintains the historic mansion.

In 1967 Community College District #15 was formed, expanding WVC's district to include all of Chelan, Douglas and Okanogan counties. Classes were first held in Okanogan County in a former Omak hospital building, until the Omak campus was established in the mid-1970s on the site of a former Catholic school (on a half block near downtown Omak.)