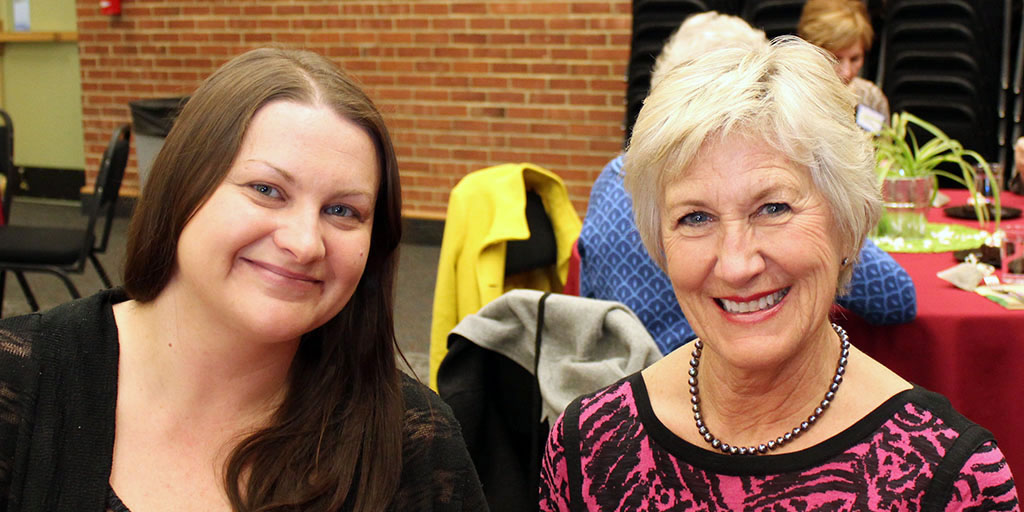 A desire to honor their parents’ dedication to high-quality health care, coupled with their belief in the power of education to transform people’s lives, led Peggy Ludwick and her brother Jack Ludwick to establish a scholarship at Wenatchee Valley College in 2014.

So far, seven students have received a financial grant from the Ludwick Family Health Sciences scholarship fund.  Applicants must be financially needy women aged 25 or older who have experienced a significant interruption in their education and are studying toward a career in the health sciences.

Why did the Ludwicks choose to focus on this group of students? “In the last few months of their lives, my parents received excellent, compassionate care from young caregivers who often were working full time to support their families while also going to school,” Peggy explained. “Due to life choices and/or lack of financial resources, many of these women were unable to pursue higher education right after high school.  We recognized the need to support these women in realizing their dreams for a brighter future.”

In addition to assisting students, “We hope these scholarships will also increase the pool of well-trained healthcare professionals in the Wenatchee Valley,” she said. “The World Health Organization has documented the fact that investing in women’s education is the most cost-effective approach to improving children’s lives and raising poverty levels. When you educate women, their children are also more likely to seek higher education and have better lives.”

Their father, Dr. Arthur L. Ludwick, practiced family medicine for more than 52 years, 43 of them in Wenatchee. He was a much-appreciated doctor to multiple generations of families. He died in 2008 at age 94.  A decorated combat physician on the front lines in North Africa and Italy during World War II, he also was an inspirational instructor and mentor to University of Washington medical students and family practice residents during their clinical rotations.  In 1963 Dr. Ludwick built the Wenatchee Professional Building on Orondo Street in Wenatchee. Family Practice physicians occupied the top floor, and dentists practiced on the lower level. That building has been occupied by health care professionals since it was erected.

Their mother, Jean Hoyer Ludwick, strongly advocated for community colleges and their key role in providing access to higher education for place-bound or financially disadvantaged students.  She served on the Wenatchee Valley College’s Board of Directors from 1968-1973. Subsequently, she was appointed by then Washington State Governor Dan Evans to the State Board of Community Colleges, serving from 1974-1980. She was 95 when she died in 2013.

“We hope to expand our donor base to grow this scholarship fund and be able to support even more students,” Peggy pointed out. “We welcome any contributions from community members who can be assured that an investment in these women’s educations will be money well spent.”

Awarding the scholarships brings great joy to Ms. Ludwick. However, as a member of the selection committee, she said she finds it “extremely difficult to choose only two or three recipients every year because there are so many deserving and needy students.” Students’ responses on the application form, which requires significant time and effort, provides her a valued opportunity to “know them beyond just a grade point average or profile form,” she said.

In addition to receiving heart-felt letters of appreciation from scholarship recipients, Ms. Ludwick has met some of the students.  “It was wonderful to learn how the scholarship has impacted their lives and how they’re progressing towards obtaining a college degree,” she said.  “Their incredibly hard work and dedication to improving their lives are inspiring.”

Born and raised in Wenatchee, Ms. Ludwick earned a Bachelor of Science degree in Microbiology and Public Health from Washington State University in 1970. Over the next two years, she did post-graduate work and an internship in Medical Technology (Clinical Laboratory Science) at Stanford University Medical Center. A year ago - - after living in California, New York, and most recently for 38 years in Yakima - - she moved back to Wenatchee.

A micro-biologist and registered medical technologist, she has conducted research in immunology as well as worked in hospital clinical hematology labs. While living in Yakima she worked mostly in the Yakima School District as a gender equity consultant, while raising three children with her husband. Most recently she served as the marketing and social media coordinator for the University of Washington’s $28 million “Gear Up STEM (Science, Technology, Engineering and Math) grant.  It focuses on schools in the Yakima Valley that have high minority enrollments and low socio-economic student profiles.

“Moving back to Wenatchee after 50 years has been an interesting experience,” she said. “The town has grown and changed in many ways, but the most important aspects, that I probably didn’t fully appreciate when I was younger, have remained the same: a generous and vibrant community that values well-trained medical professionals, quality education for everyone, civic involvement and advocacy, and an engaged arts community.  I’m excited to be a part of it.”