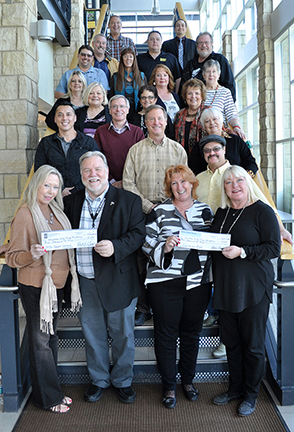 The Wenatchee Valley College Foundation was recently presented with two contributions generated by the third season of RLS Productions’ Concerts in the Gardens, a five-week long summer concert series held throughout July and early August at Ohme Gardens.

This is the third year that Robert and Catherine (Rio) Sandidge, founders and owners of the concert series, have presented the WVC Foundation with a contribution in support of WVC students. Part of this year’s annual contribution was made possible by matching support from Dennis and Beth Dobbs, owners of Horan Estates Winery in Cashmere, for the second year in a row.

Robert Sandidge recognized Dennis and Beth Dobbs of Horan Estates Winery, and The Names Foundation for their generous contribution to RLS Productions’ Concerts in the Gardens endowment scholarship fund. He also thanked Peter Rivera, The Wenatchee Big Band, Michael Derosier and Steve Fossen of Heart by Heart, Tim Langford of Too Slim and the Taildraggers, Scott Cossu Band and band members from each group.

“Rio and I would also like to extend our sincere thanks to all our sponsors, supporters, volunteers and the musicians all of who made it possible for us to produce our Concerts in the Gardens,” Sandidge added. “The 2017 series promises to continue with a stellar line up.”

Stacey Lockhart, WVC Foundation Executive Director said, “The WVC Foundation is extremely fortunate to have such incredible friends in the community and serving on our board of directors.  The support from both sponsors and supporters in our community combined with the vision and leadership of Robert and Rio Sandidge are changing the lives of WVC students forever through the annual scholarship contributions.”

The WVC Foundation was incorporated in 1971. It exists to build relationships between the community and the college and raise financial support for Wenatchee Valley College students, programs, faculty and staff, as well as special projects such as building campaigns like the Music and Art Center. For information on how to make a gift to the foundation, establish a scholarship or include the WVC Foundation in your estate plans, contact Stacey Lockhart, executive director at 509.682.6410 or slockhart@wvc.edu. Visit the WVC Foundation website at www.wvc.edu/foundation.

Three goals drive RLS Productions’ Concerts in the Gardens. First, increase mid-week tourism outside a 50-mile radius of Wenatchee Valley and its bedroom communities. Second is to lay the foundation for the ability to produce and build a world-class intimate venue at Ohme Gardens, resulting in increased tourism. Third, build a $35,000 scholarship endowment for the Wenatchee Valley College Foundation through an annual contribution of 25 percent of the net ticket sales, while at the same time generating immediate annual financial assistance for students in need.  Information on the 2017 RLS Productions’ Concert in the Gardens summer series are available at www.RLSproductions.net.