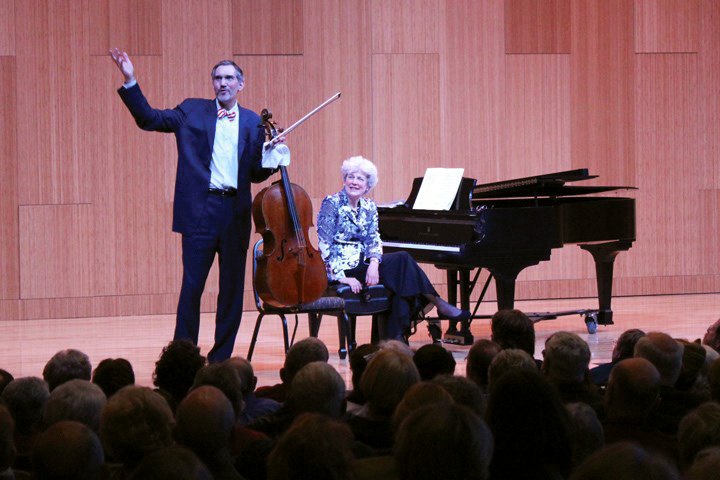 The concert this year is being held in memory of Wilfred Woods. Wilfred and Kathy Woods brought the Piatigorsky Foundation concerts to WVC after the MAC opened in 2012. The Woods family continues to sponsor the biannual concerts.

Evan Drachman has combined musical talent with artistic vision to create a rich and varied career. As Founder and Artistic Director of The Piatigorsky Foundation, he has become one of the most respected authorities on the presentation of live classical music for diverse audiences everywhere. In 1999, Drachman recorded his first CD, “A Frog He Went a Courting,” with pianist Richard Dowling. Following this success, Drachman and Dowling released “Infinity” in 2004 and “Romance and Revelation” in 2007. Drachman has appeared regularly as a soloist with orchestras, and in recitals and chamber music performances across the U.S. and abroad. Born in Boston, Mass., Drachman studied at the Peabody Conservatory, the New England Conservatory, and received his Bachelor of Musical Arts from the Curtis Institute of Music. Drachman currently lives in Maryland with his wife Joan and their two sons, Eli and Oliver.

Lisa Bergman is a national Gracie Award-winning radio announcer on Classic KING-FM, appearing daily, streaming worldwide. Bergman is founder and Artistic Director of the Mostly Nordic Chamber Music Series in Seattle and as Executive Director of NOISE (Northwest Opera in Schools, Etcetera). She is the Adult Piano Retreat Director at the Icicle Creek Center for the Arts in Leavenworth, Wash., where she served for seven years as the Executive Director. She was Artistic Director of the Methow Chamber Music Festival from 2003-2006. Lisa is also a concert pianist specializing in collaborative piano and chamber music, and is a graduate of the Juilliard School, the State University of New York at Stony Brook and the University of Washington, cum laude. She made her Carnegie Recital Hall debut in 1983. As a recording artist, her discography includes six chamber music CDs and one solo CD. Bergman is a member of the Hall of Fame for the Washington State Music Teachers Association.