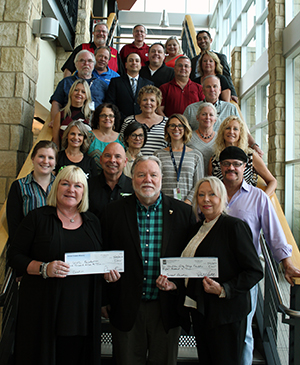 The Wenatchee Valley College Foundation received $12,000 in contributions raised during the 2017 season of the RLS Productions’ Concerts in the Gardens. The RLS Productions’ Concerts in the Gardens is a five-week summer concert series held annually through July and early August at Ohme Gardens in Wenatchee, Wash. This is the fourth year that Robert and Catherine (Rio) Sandidge, founders and owners of the concert series, have presented the WVC Foundation with a contribution for WVC students.

Support comes from direct donations, ticket sales and sponsors of the concert series. RLS Productions set a goal in 2014 of raising $35,000 to endow a scholarship for the Wenatchee Valley College Foundation. After this summer, the endowment fund has increased to $17,000 and donations to the foundation over the last four years total $27,000.

“Scholarships such as these lay the foundation for student success right here in Wenatchee,” said David Davin, executive director of the WVC Foundation. “It is not an exaggeration to say that many students would not be able to complete their studies without the much-needed assistance that scholarships like these provide. The fact that we can do them in tandem with a great community event is icing on the cake.”

“Education helps build a strong foundation in an individual’s overall success,” added Robert Sandidge. “Rio and I feel very blessed to have the continued support of individuals and business community leaders for the concert series. This helps us promote tourism for our Wenatchee Valley and award scholarships to students in need at Wenatchee Valley College.”

Part of this year’s annual contribution was made possible by support from Dennis and Beth Dobbs, owners of Horan Estates Winery in Cashmere and The Names Foundation. Each gave $2,000 this year, for a total of $4,000 for scholarships awarded during the 2017-2018 school year. SanRay Orchards, LLC also contributed $3,000 toward the RLS Productions endowment account.

“An education is an amazing gift,” the Dobbs’ said. “The WVC Foundation is an asset in our community. We want those opportunities to continue to be available. Our love of music, continued support of our community and the annual scholarships that arise from RLS Productions’ Concerts in the Gardens series made this contribution a natural fit.”

Three goals drive RLS Productions’ Concerts in the Gardens: First, increase mid-week tourism outside a 50-mile radius of Wenatchee Valley and its bedroom communities. Second, develop the series into a regional concert series held at Ohme Gardens, resulting in increased tourism. Third, build a $35,000 scholarship endowment for the Wenatchee Valley College Foundation through an annual contribution of 25 percent of the net ticket sales, while at the same time generating immediate annual financial assistance for students in need. Information on the 2017 RLS Productions’ Concert in the Gardens summer series are available at www.RLSproductions.net.

The WVC Foundation was incorporated in 1971. It exists to build relationships between the community and the college and raise financial support for Wenatchee Valley College students, programs, faculty and staff, as well as special projects such as building campaigns like the Music and Art Center. For information on how to make a gift to the foundation, establish a scholarship or include the WVC Foundation in your estate plans, contact (509) 682-6410. Visit the WVC Foundation website at www.wvc.edu/foundation