WVC IS OPERATING REMOTELY - While our campuses are closed, connect with us online. 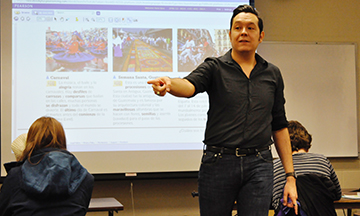 Wenatchee Valley College offers credit courses in German, Japanese, Latin and Spanish as options for fulfilling the humanities requirement (15 credits) for the associate of arts and sciences degree. Native American language (Salish) is taught on the WVC Omak campus and may be used to meet an elective requirement for the AAS degree. In addition, noncredit courses in Spanish, German, Latin, French, Japanese, Russian and other languages are often offered at both campuses through the continuing education department.

Three levels of German, three levels of Latin, six levels of Japanese, and six levels of Spanish are currently listed in the college catalog. In addition, students may pursue individual interests through independent study language courses. Special courses designed to deal with unique subjects or timely topics are occasionally offered.