RLS Productions’ Concerts on the Campus raises $100,000 for scholarships 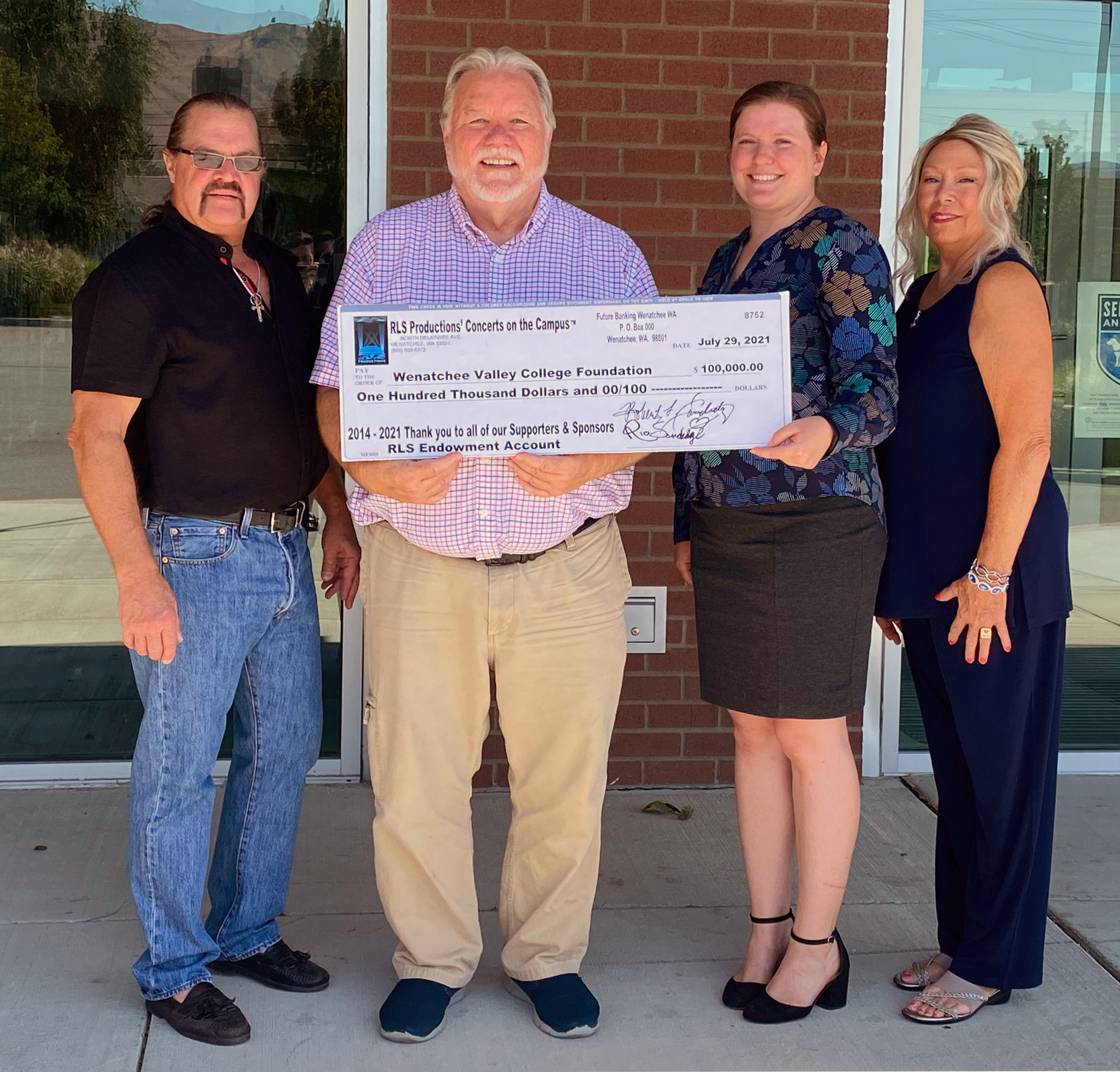 After a successful 2021 concert season, the annual RLS Productions’ Concerts on the Campus series has raised a cumulative $100,000 for the RLS Productions Scholarship since its inception in 2014. This year’s series included the Encore Challenge, which encouraged donors to help meet the $100,000 goal.

Founded by Robert and Catherine (Rio) Sandidge, the RLS Productions’ Concerts on the Campus is a five-week summer concert series held in Wenatchee. This was the first year it was held on the Wenatchee Valley College Cooprider Sport Fields Complex near the Student Recreation Center.

“It is amazing how the series and the endowment have built over the years,” said WVC President Jim Richardson. “I appreciate the generosity of Robert and Rio, and all the people who have attended concerts. WVC students directly benefit due to their support and involvement.”

“The collective impact RLS Productions’ Concerts on the Campus is astounding,” said WVC Foundation Executive Director Rachel Evey. “One of the best things about the scholarship is that, as an endowment, it will support future generations of students in perpetuity. The concerts, and everyone involved in them, are an investment in our community’s future.”

Funding for the RLS Productions Scholarship comes from direct sponsorships, ticket sales and supporters of the concert series. Robert and Rio Sandidge recognize all the generous sponsors, supporters, volunteers, and concert goers, both past and present.

“Rio and I feel so blessed that the Wenatchee valley believed in this series and how it gives back to the college,” said Robert Sandidge. “We are grateful for the past seven years of support we received from our sponsors, supporters and concert attendees. We know they rely on us to not only promote their businesses and provide an exceptional concert series, but to also give back to our community in the form of scholarships. When Rio and I started this pursuit, we never dreamed we’d reach this level of contributions.  We owe it to all these generous individuals, businesses and volunteers.”

For more information on the concert series, visit RLStalent.com.

The WVC Foundation was incorporated in 1971. It exists to build relationships between the community and the college and raise financial support for Wenatchee Valley College students, programs, faculty and staff, as well as special projects such as building campaigns like the Music and Art Center. For information on how to make a gift to the foundation, establish a scholarship or include the WVC Foundation in your estate plans, contact (509) 682-6410. Visit the WVC Foundation website at wvc.edu/Foundation.

Wenatchee Valley College is committed to a policy of equal opportunity in employment and student enrollment. All programs are free from discrimination and harassment against any person because of race, creed, color, national or ethnic origin, sex, sexual orientation, gender identity or expression, the presence of any sensory, mental, or physical disability, or the use of a service animal by a person with a disability, age, parental status or families with children, marital status, religion, genetic information, honorably discharged veteran or military status or any other prohibited basis per RCW 49.60.030, 040 and other federal and state laws and regulations, or participation in the complaint process. The following persons have been designated to handle inquiries regarding the non-discrimination policies and Title IX compliance for both the Wenatchee and Omak campuses: